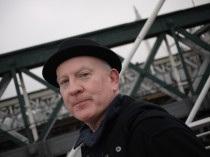 Born in 1961 my earliest childhood memories are of paints, crayons, and the mountains of pencils. I have been painting professionally for over 6 years,working mainly in oil, but also in acrylics and mixed media. I have travelled and lived across the UK and Ireland, much of it by the sea which is a constant inspiration for my work.
Now based in Glasgow I continue to try and capture the light and moods of coastal Scotland and Ireland in my paintings.
Evocative,romantic, wild and magnificent the Sea is the never ending inspiration and motivation for my work. From glassy obsidian black to the looking glass reflection of the setting sun, the infinite changes of colour and aspect defy the artists hand to tame. My work tries to capture not only the the salt spray, the crashing wave, but the feeling, memory, and essence of the sea in its many guises.

My work is held in private collection across the UK, Ireland, Australia and Canada. ﻿﻿

Articles and reviews and media appearances.